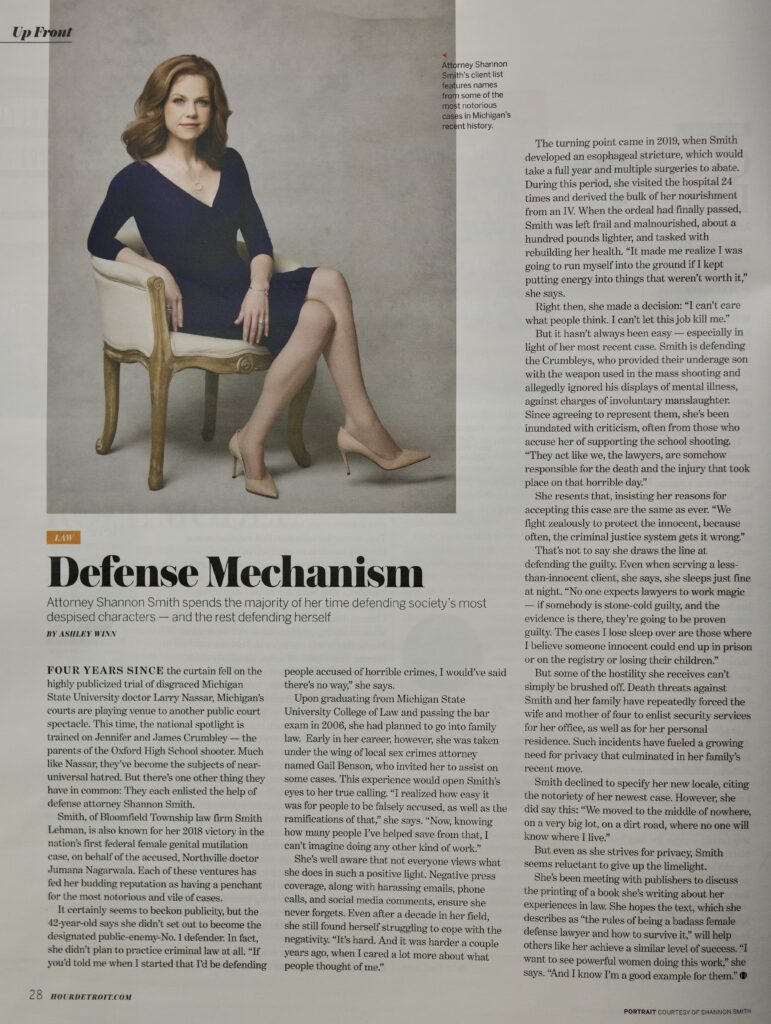 FOUR YEARS SINCE the curtain fell on the highly publicized trial of disgraced Michigan State University doctor Larry Nassar, Michigan’s courts are playing venue to another public court spectacle. This time, the national spotlight is trained on Jennifer and James Crumbley–the parents of the Oxford High School shooter: Much like Nassar, they’ve become the subjects of near- universal hatred. But there’s one other thing they have in common: They each enlisted the help of defense attorney Shannon Smith. Smith, of Bloomfield Township law firm Smith Lehman, is also known for her 2018 victory in the nation’s first federal female genital mutilation case, on behalf of the accused, Northville doctor Jumana Nagarwala. Each of these ventures has fed her budding reputation as having a penchant for the most notorious and vile of cases. It certainly seems to beckon publicity, but the 42-year-old says she didn’t set out to become the designated public-enemy-No. 1 defender. In fact. she didn’t plan to practice criminal law at all. “If you’d told me when I started that I’d be defending people accused of horrible crimes, I would’ve said there’s no way,” she says. Upon graduating from Michigan State University College of Law and passing the bar exam in 2006, she had planned to go into family law. Early in her career, however, she was taken under the wing of local sex crimes attorney named Gail Benson, who invited her to assist on some cases. This experience would open Smith’s eyes to her true calling. “I realized how easy it was for people to be falsely accused, as well as the ramifications of that,” she says. “Now, knowing how many people I’ve helped save from that, I can’t imagine doing any other kind of work.” She’s well aware that not everyone views what she does in such a positive light. Negative press coverage, along with harassing emails, phone calls, and social media comments, ensure she never forgets. Even after a decade in her field. she still found herself struggling to cope with the negativity. “It’s hard. And it was harder a couple years ago, when I cared a lot more about what people thought of me.” The turning point came in 2019, when Smith developed an esophageal stricture, which would take a full year and multiple surgeries to abate.

During this period, she visited the hospital 24 times and derived the bulk of her nourishment from an IV. When the ordeal had finally passed, Smith was left frail and malnourished, about a hundred pounds lighter, and tasked with rebuilding her health. “It made me realize I was going to run myself into the ground if I kept putting energy into things that weren’t worth it.” she says. Right then, she made a decision: “I can’t care what people think. I can’t let this job kill me.” But it hasn’t always been easy – especially in light of her most recent case. Smith is defending the Crumbleys, who provided their underage son with the weapon used in the mass shooting and allegedly ignored his displays of mental illness, against charges of involuntary manslaughter. Since agreeing to represent them, she’s been inundated with criticism, often from those who accuse her of supporting the school shooting. “They act like we, the lawyers, are somehow responsible for the death and the injury that took place on that horrible day.” She resents that, insisting her reasons for accepting this ease are the same as ever. “We fight zealously to protect the innocent, because often, the criminal justice system gets it wrong. That’s not to say she draws the line at defending the guilty. Even when serving a less- than-innocent client, she says, she sleeps just, fine at night. “No one expects lawyers to work magic – if somebody is stone-cold guilty, and the evidence is there, they’re going to be proven guilty. The cases I lose sleep over are those where I believe someone innocent could end up in prison or on the registry or losing their children.” But some of the hostility she receives can’t simply be brushed off. Death threats against Smith and her family have repeatedly forced the wife and mother of four to enlist security services tor her office, as well as for her personal residence. Such incidents have fueled a growing need for privacy that culminated in her family’s recent move. Smith declined to specify her new locale, citing the notoriety of her newest case. However, she did say this: “We moved to the middle of nowhere, on a very big lot, on a dirt road, where no one will know where I live.” But even as she strives for privacy, Smith seems reluctant to give up the limelight. She’s been meeting with publishers to discuss the printing of a book she’s writing about her experiences in law. She hopes the text, which she describes as “the rules of being a badass female defense lawyer and how to survive it,” will help others like her achieve a similar level of success. “I want to see powerful women doing this work,” she says. “And I know I’m a good example for them.”